I don’t know how many times I’ve written this, uploaded it, only for it to be deleted.  Perhaps this is the last time? Probably not lol.  What follows is a memoir written by me around the year 2000, edited with some updates for 2009.

Lost? Don’t recognise anything?  Perhaps the images below will jog your memory.  These are the old faces of Wu-Tech Corp.

The very first page was deleted eons ago but if you remember a page in 1997 with red brick as the background and lots of little super deformed KOF animated gifs situated at Tokyo Towers/Geocities – that was it.  That was KOFFF, The King of Fighters Fatal Fury Reference.  The site was small and basically stored excerpts from the KOF-ML, which was a busy mailing list back in 97.  I did the usual collection of pics and wrote a large fanfic.  The news was always updated as I bought Japanese magazines such as Gamest, Neogeo Freak and Famitsu. My friend, quang, set up a sprite rip site called “The Recovery Room”. My other friend, Black Cat, started setting up a Capcom page.  We wanted a collective name, so I remembered the first time we went to an arcade show I had thought up the name “Wu-Tech Corp.”  So we stuck with it.  Black Cat went on to write a Resident Evil FAQ.  Talking of Faqs, the one that still haunts us to this day is the Silent Hill FAQ.  I’m very proud of it as I still get compliments about the way it’s written. Thanks, you guys!

The next thing I remember was moving onto a pipex dial webspace because it was quicker.  Then quang set up datapotato and put the recovery room there.  It was hosted on simplenet with infinite space so I jumped on.  Then er… the server crashed due to heavy traffic.  When it got back up, it was sluggish as hell.  So we buggered off to quangdx.com, which was hosted by nethollywood.  Ahem, RIP, same fate.  Then I got offered space at Fighters.net.  However, it ran into problems with its service provider and had to close, so finally I bit the bullet and bought my own server.  Which seems to be holding up though it did threaten to boot me off because of overloading bandwith due to KOF2K combo videos. I moved in with TAU to try and alleviate the stress, but that server had problems.  So here I am with www.orochinagi.com.  I’m leaving this page and perhaps a few personal things here whatever happens to the other KOF sections etc.

In short, all the KOF files (video, audio, pics, scans, combos, wallpapers, etc) have been removed BUT will be back up at some point.  Keep orochinagi bookmarked because it will always be here.

(Talking about the joystick navigation menu) That particular style went sideways as opposed to the traditional up and down.  I won the FTTF (Fighters to the Finish) design award that year! Ahh…. then I got bored with it and scrapped it.  I always tried to achieve a balance between flashy graphics and quick loading time.  I still haven’t found the answer.

Before this site there was a huge scrolling front page with Kyo and Iori in the background as sketches with all sections as large button links.  I took a liking to the Leona pic which you can see above, which was the old logo for the Bulletin Board.  It was all imagemapped and took ages to load.  Reality kicked in and I changed the design to the white background and five main neoprint style images for the site.

Ooh, I also remember a slim style page “Summer Style” with Terry at the top with a paint brush that painted the KOFFF sign and Joe at the bottom doing his moon taunt. (Backing up files wasn’t as easy as it is now, and I worked from home, uni and work, so many files were lost, after being uploaded to various free servers such as Geocities, Tripod, Angelfire, etc)

The “Mad” photo linked to the Recovery Room.  At this point capturing movies from Playstation games was all the rage (well for me anyway) so I took a lot of time uploading movies.  I also wrote the popular Silent Hill Faq which still haunts me now.  Great game!  As you can probably tell I played Bust a Move a bit too.  The Dino Crisis section was a flop, as I and Black Cat ran out of steam.  Humph.  Oh well. 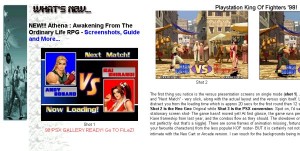 Sprite rips were relatively new back then… Woah, I sure had some spare time on my hands… Learning Adobe meant lots of transparencies.  Hmm… Still looks neat… At this point everything went into NEGATIVE…. It was weird…

Anyone remember the bouncing Orochi Iori?

I took on a large task of dedicating a section to each and every character in KOF, with combos, movelists and links.  It was exhausting.  I had each name made into a gif using the Neogeo Font I had captured.  Remember? I started to amass a large collection of pics, simply obtained from the PSX versions of KOF. We jump forward a few years here.  This is when I got my hands on the 99 Mook.  I had to cut around Iori and it was a bitch! I posted the first pics of SNK vs Capcom at about the same time as Madman.  Some people blasted them as fake and hey, they can kiss my ass now ^_^. At this point, I dropped Fatal Fury and the other games because I had less time on my hands and I simply didn’t really play them.  I ditched the light and went into the darkness. 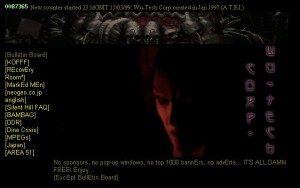 The Shermie Site got a quick makeover but nothing special.  I’m gonna bring this one back sometime. I was rather happy with this design (above).  What I should have done was put graphical links instead of text.  But I try to keep loading times low… Bah, I said I dropped FF, but it looks like I forgot! Damn title is like a catchphrase to me… The design you see on below actual page was made by Godhand.  We got offered space at TAU.  I honestly think we messed up their server.

11th April 2001: orochinagi’s server went down due to excessive bandwith.  I got offered integration with neo-geo.com.  The communities clashed and then I got an offer from Gamespy’s Planet Dreamcast.  Planet Dreamcast… wow, gamespy’s servers weren’t taking any shit!  Nothing I could do dented their uptime… until around 2002 where PDC announced they had to cancel hosting.  However, Gamespy offered me my own space, which is how kingoffighters.planets.gamespy.com came about.  This space lasted well up until Summer 2009, where gamespy announced they had to cancel hosting.  I bought my own server space, and so far… so good!  We’re still here, in bits, fragmented, but still kicking.  God knows what will happen next.  The KOF scene has cooled down somewhat but new blood has come in with XII. 2010 marks ON’s anniversary, as orochinagi.com was registered at the millennium.  Here’s to another ten years!

Anyway, here are a few more site shots showing how the site design has evolved…


If you were remember any of the images and wondered what happened to that site, now you know.  You’re at the right place!  One day, all the material I have will be back up in one place.  One day… (If I don’t have to keep re-uploading all over again, every bloody time!)