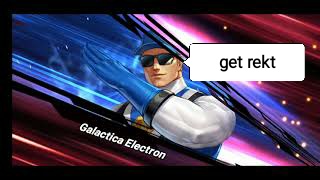 the flashing red or blue screen will signify who you will face first.

Purple element has the leverage. With a little luck, a maxed out Kyo96 can do this all by himself

If you have a purple element such as level 90 Kyo96 with max cores, that will be fine for auto mode. He’ll destroy them.

You’ll need about 16k and a bit of luck for auto mode. You do need to complete this level if you want be able to collect enough souls to complete the festival. You need 200. You may be able to get them somewhere else though (such as the secret shop)… Here are some tips:

You will be attacked by generic rangers, with one leader type, who is larger than the others. Use your special moves here, you’ll recharge those in no time.

Randomly, a little person will appear. Defeat it to get a double reward bonus!

Then, after two to three waves, the Sentai Rangers will appear.

Ralf will attack, which you can block. Hit him after the TWO explosions.
Clark is more dangerous because after he finishes his string of attacks he will do his mount tackle, which will grab you regardless of what you are doing, unless it is your super. Stand at the range outside his tackle (one third of the screen) and then punish him.

When you have done enough damage, they will disappear and go for the Cross Changer, where they will do a routine of poses.  This is when you need to hit them.  Here we have two problems.

This best way to stop their super move is to hit them with your own super!

They share life energy so it doesn’t matter who you hit, so you may want to stand in the middle or push them together from the side.

If you hit them, they will be stunned. If you don’t have a super ready, mash the button!

If they suceed to finish their pose routine, they will hit you with the Galactica Electron, which is unblockable, although you can call in striker or tag out (only worked once for me though). After a few attacks they will hop away and bring out a laser cannon. Walk up or down out of its path. Be aware that the path is a bit wider than it appears. As the laser finishes, they will do a little pose, run in to punish them!

Again they will go for the Cross Changer/ Galactica Electron when you have done enough damage. Make sure you have saved your super.

When you get them to 4 bars of energy they will attack you simultaneously. This is horrible. Try to roll behind them and use an attack that keeps you at a distance. grabs will do damage but they wont go through the “grabbed” animation and likely hit you straight after. Keep an eye out for laser cannons and if they hit you, it is possible to press roll and UP to escape. Feel free to use your super #2, if available. Good luck!