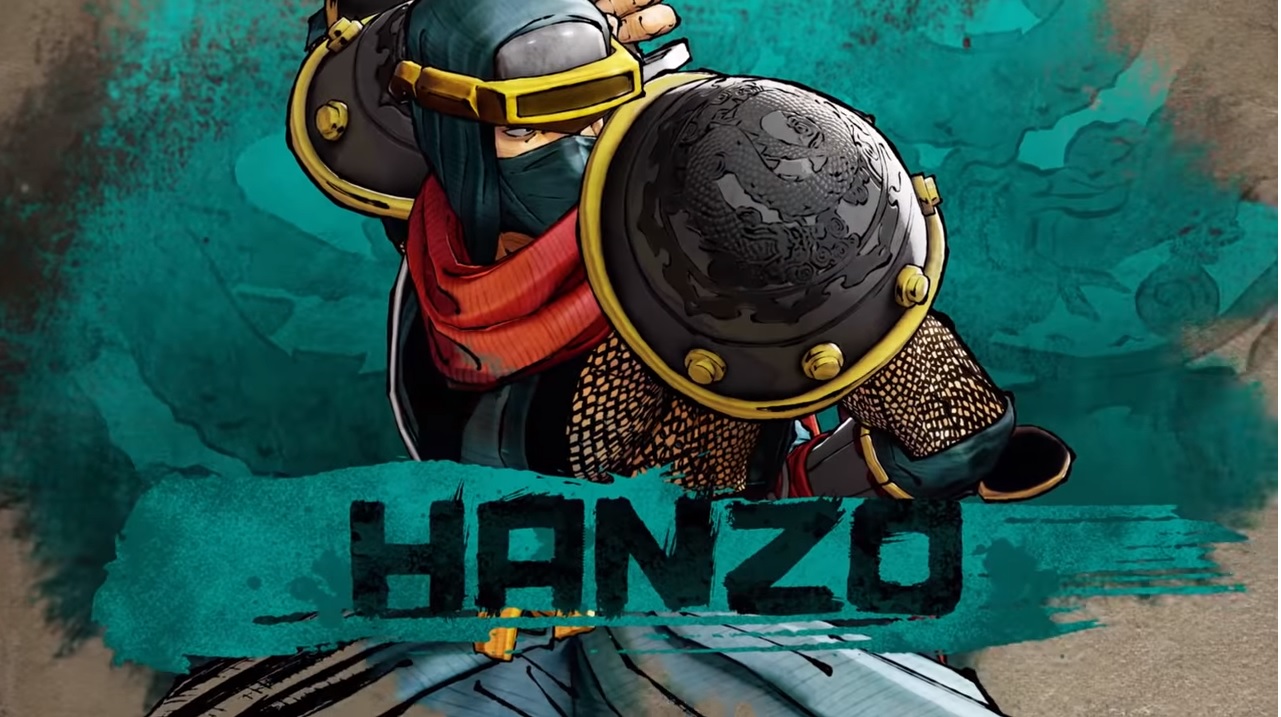 If you’re coming from KOF, Hanzo is like Clark, but worse. Hanzo will lose to normal throws, his command throw is 6F at best.  More precision is required to execute his air throw and his WFT doesn’t hit everyone from a normal throw. His teleports are slow.  On the plus side, he has more range than anyone on his command throws and they do as much damage as one heavy hit. His teleports are more viable online when reactions are reduced by lag and he has a decent mixup after knockdown, especially if the opponent doesn’t realise they can jump out of most options.

4F on standing, so use this is a panic, it’s his fastest move.

Nice range, quick enough for exchanges and can cancel into special moves, even the H grab ^^ Yes that’s right, you can tick throw (false combo throw) with this button. After overhead, you can execute safe jumps with this button (check tech section)

Great anti air, otherwise don’t use it while standing next to opponent, it’ll only hit Earthquake!

From far this will launch Hanzo into a jumping attack. Your best move after a normal throw is crouching H.

Hanzo slashes the floor.  Good for mixing up with dash H, as they need to block standing.

Hanzo jumps into the air with a spinning slash. Can crossup. Counts as an aerial maneuver.

Hanzo sweeps the leg. Can work against wake up roll by holding back, a lot of opponents don’t block crouching after rolling (until they read this).

A sliding kick. Perhaps low profile and if it hits with the tip, safe.

Jump onto the wall, then press up-forward to jump off. There is a small range around the peak of the jump, lower than that, it won’t work.

Unlike Clark in KOF, Hanzo cannot press up forward to grab the mid air opponent.  Hanzo must be next to the opponent in the air. Pressing any other direction will result in the Kick

Rage hits multiple times and can be followed with another move before the 7th hit. Issen works.

Hanzo moves through the shadows to fall from above the opponent. Aerial moves are possible.

The Cicada must fall one day, but like a rose, it is not without thorns. Punish those who do not understand the circle of life.

Also, if they block, expect to re-start the cycle of life, as the stage of death will surely be upon you.

The Cicada is not as defenceless as it looks. Teleport and kneecap those who would disrespect the shinobi. If opponent blocks, there will be a grave payment to the reaper.

Best used as a mixup on waking opponent or to counter a projectile from far screen.

Is Hanzo trying to impress Charlotte or just trying to be chic amongst the ninja clans? Either way this move through the shadows can scare your opponent into blocking while he simply moves around the screen.

The position of the teleport is relative to the buttons

Check Strategy section for how to use this effectively.

The legendary throw where Hanzo grabs the opponent and jumps into the air, spinning around as they drop head first to the ground.

(format check, data below if problems)

Hanzo flies with the captured opponent backwards in an arc.

Since Samsho makes you stop running when in proximity, it can cancel your input if done too late.

154 same damage across all buttons

Do not run into close range of a still waking opponent, your run will stop automatically.

It is suspected that this move is invincible at start up, as it can has grabbed Genjuro’s anti air on wake up.

This shadow teleport doesn’t go anywhere but seems to be faster.  Use it in anticipation of a strike, to go through it and then grab them straight after!

Taking to the air, Hanzo throws his shuriken at his foes.  He will pause mid air while doing this, and then fall backwards.  Really vulnerable if they dodge!

Strength adds more shuriken to a maximum of three.

If you’re trying to bait an anti air, it’s not recommended. The opponent will not be knocked over and the recovery is very long.

The opponent smiles as they see their steel cut through the staggering Hanzo, but it was in fact a decoy, as the opponent discovers they hit a log of wood, and Hanzo falls from the sky onto his confused opponent with a slash.  You can buffer this escape and press the button as you get hit- the quicker you execute the command, the quicker you can punish, too late and you will be more vulnerable.  If opponent jumps, Hanzo will wait until they land before appearing (tbc).

As with his gnashing cicada, Hanzo vanishes after being hit, only to rise from the depths of hell to bite the ankles of his opponent.

Hanzo’s Weapon Flipping Technique : very small range and the throw into WFT doesnt work on all characters. Guaranteed by back throw into corner.

Slow, but use the invincible start up, when backed into the corner, as a great counter!

Note you cannot buffer the move, it must be done outside of any other move animation. This is why the input seems to fail, same as wft (thx Inti)

Your objective is to knock over the opponent and then apply your mixup.

Hanzo is about smoke and mirrors, against an opponent with keen reflexes, they will simply slice through. He doesn’t have any good defense options against a rushdown, he can’t use teleports to escape, so he needs to zone his opponent into blocking and then get the grab and then the oki mixup.

Get back and execute a few Ninja Silencers to get the opponent ready to guess where you will appear next – if the opponent starts pressing buttons, you could go for a cicada to punish.  However, if these are blocked, you will die.

Use Exploding Dragon to provoke opponent to move, see if your foot will get cut off when you use K as an anti air.

Use M to keep opponent away, take a chance and cancel it into Mon Dance, teleport or counter!

Use silencers / cicadas in advance, not as a reaction.

If opponent blocks, only a grab will work

If opponent jumps, only hits will work

if opponent rolls back

if opponent rolls behind you

if opponent will grab

You can use cr H to help your timing – check the video.

The timing of your HS can cross up

Tricks for one time use

-Activate Rage, qcb H, if they don’t block the multiple hits, then Issen!

Self sacrifice by Maccoy!!

Remember you can buffer!

Find Your Tech Clips for Hanzo