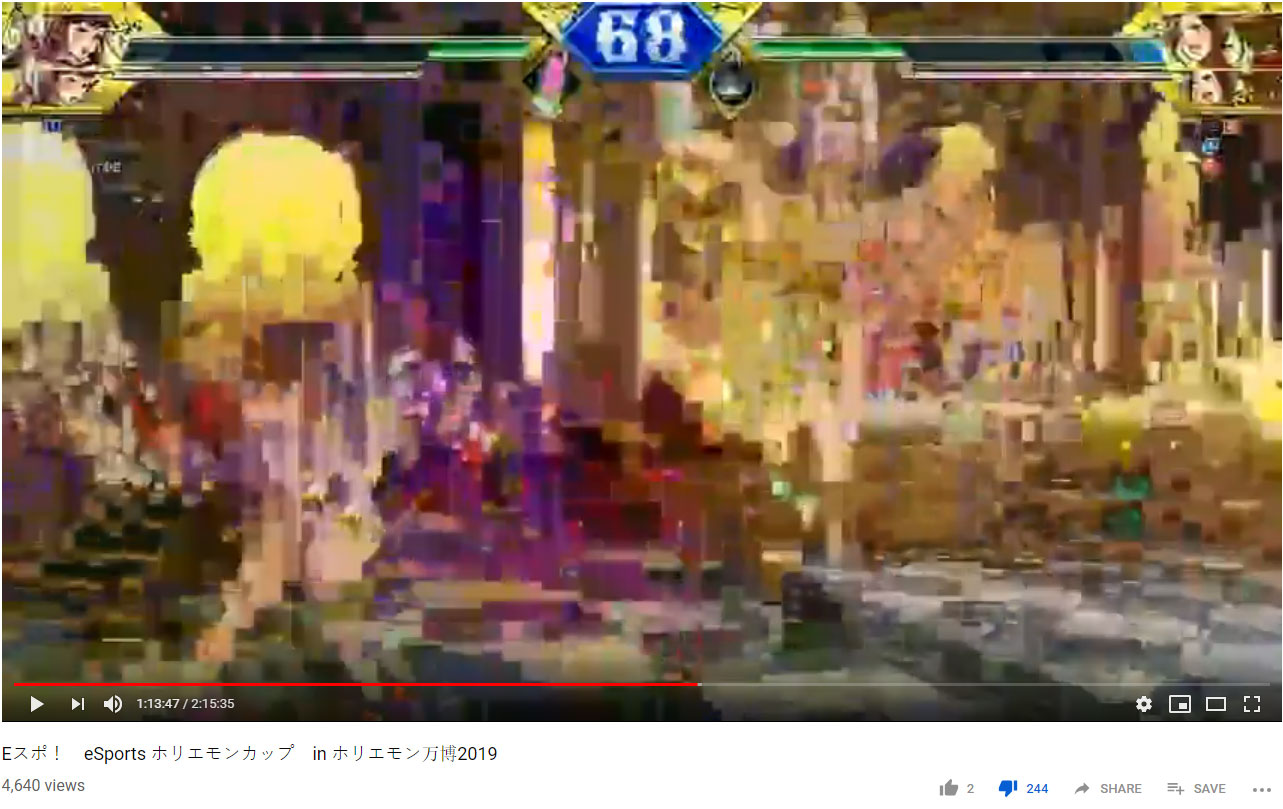 In 2019, it seems obvious that eSports events would be the last place you’d see incompetence when it comes to dlc and updated / patched games, however the exact case happened, in Japan, of all places. After seeing the name pop up on Twitter with such negativity, it seemed important to expose this situation, so that other companies can see that there are consequences to running an event poorly, not to mention how it looks like it is taking advantage of SNK’s support program. The community will not stand for this.

First of all, Horiemon Cup ホリエモンカップ, is the creation of Takafumi Horie, a famous Japanese investor.

The Horiemon cup was advertised to feature three SNK games: KOFXIV, SNKHEROINES & KOF98. They announced that they were supported by SNK, and probably because this was the third in the series, and as the event was a part of a huge expo, SNK decided to send the Sound Team to do a short concert, too.

The first event was run with SNKHEROINES, which would qualify the winner as a seed for the Cup.

-At this Horiemon cup qualifier, they used a projection screen directly from PS4, so players were forced to play watching the laggy screen.

-The screen was too far away from the PS4, so while people played in front of the screen, Bluetooth controllers became unstable and dropped inputs.

ln fact, the second event had been cancelled.

In the run up to the Cup, a player named Fair reported that the organisers didn’t confirm which game platform they would use. Players didn’t know if they should bring a controller for switch or PS4 or Neo Geo mini. The schedule was not revealed for the game order, or when people could know the snk sound team would be on stage.

Then one week before the event, they posted on Twitter that it was cancelled, only to explain a few days later that it was not the tournament, but a promotion event they had actually cancelled. The reports were confusing.

Then they posted saying they were selecting participants but you could come on the day. Still no confirmation of anything.

On the day of arrival, participants still didn’t know how to register or even how much it would cost.

Fair decided to sign up to the expo and went to the reception desk.

They gave him a generic lanyard and badge, a pamphlet, a bottle of water and told him to go wait. No payment, no confirmation of anything! Still no idea of even how much it costs!

Entering the waiting room, there were 6 or 7 ps4s, and only one was on, with the network tests screen shown.

In fact they hadn’t updated Kof14/heroines (did they even have dlc?), the building was old so perhaps on their defence they thought they could do it on the day, but really this should have been done beforehand.

It seemed that they couldn’t get internet and update so they were going to use the default ( fresh install with NO update) version of KOF and only the Arthur update for SNKH. This meant that means the game balance was seriously different: Nakoruru was available in all her broken glory and Leona would be top in both SNKHEROINES and KOF 14. If both games were not updated, that meant only one of the dlc characters would be usable, Arthur, so that’s one dlc out of 16.

Staff could be heard muttering and discussing the problem, until finally, the players heard ‘SNKHEROINES can be done!’

And then they announced Kof14 is cancelled due to some ‘mismanagement of management’.

They said, hey, KOF14 players can enter the champara kendo tournament at the next stand for free, so come along! “You can do Samsho for real!”, they said.  The players declined, obviously.

KOF98 was announced to be done in the waiting room. They had no idea if it would be on PS4 or switch or Neo Geo mini but it wouldn’t make a big difference, as long as controllers were in place.

Now, they asked for players to sign up. So, why had Fair sent emails and registered at the desk? It must have seemed like such a waste of time.

The tournament was announced to be single elimination – ft2

Fair noticed that one of Goziline’s members, Ken-chan, was doing commentary. He asked if this had been arranged in advanced. No, they replied, it just happened today at the event……

Ken-chan had actually won the first Horiemon qualifier event, where the winner would be seeded. However, here at the Cup, Ken was just placed in the beginning brackets as a usual participant, when he should have been placed further on in the brackets, so he would have less matches to play, the whole point of being a seed.

It was then confirmed that there was no other update for SNKH, just Arthur.

A freezing wind blew through the venue. Fair’s fingers were difficult to move! On top, the screens were laggy…

Sitting with the viewers, he could see that the sound and image were completely out of sync. The sound was first and then image, considerably later, so people would hear KO and not see the moment till a second after.

Checking Twitter, the stream was of terrible quality, one user posting a screenshot that was just a mess of blocks.

The tournament finished at 3.20.  They announced then that As Mr Horiemon arrives at 4.25, so please wait for the awards ceremony… (So, he wasn’t even present for the tournament and participants and viewers had to wait, to watch what and do what in the meantime?  Well, it was a giant expo so there should be something to do but for the fans who only came for this…)

The KOF98 tournament would happen AFTER all that. The fans wondered how they could use the waiting room because it was now filling up with equipment and new staff as they were preparing the next events.
But Fair wanted to be optimistic, so, he waited.
Guess what happened…
It was clear in the schedule that there were other events after the awards ceremony.
And… of course. Waiting till the last moment, they announced the KOF98 tournament was cancelled.

There are other event organisers that have been failing to live up to expectations such as Canada Cup Gaming, which has damaged their chances of having another NeoGeo World Tour stop, after not even recording the matches.  Notes have been taken.  We do hope Horie speaks to his team and they learn from this experience, but in this state, the organisation cannot be recommended.

The stream is here

Due to this, some people have been turned off esports