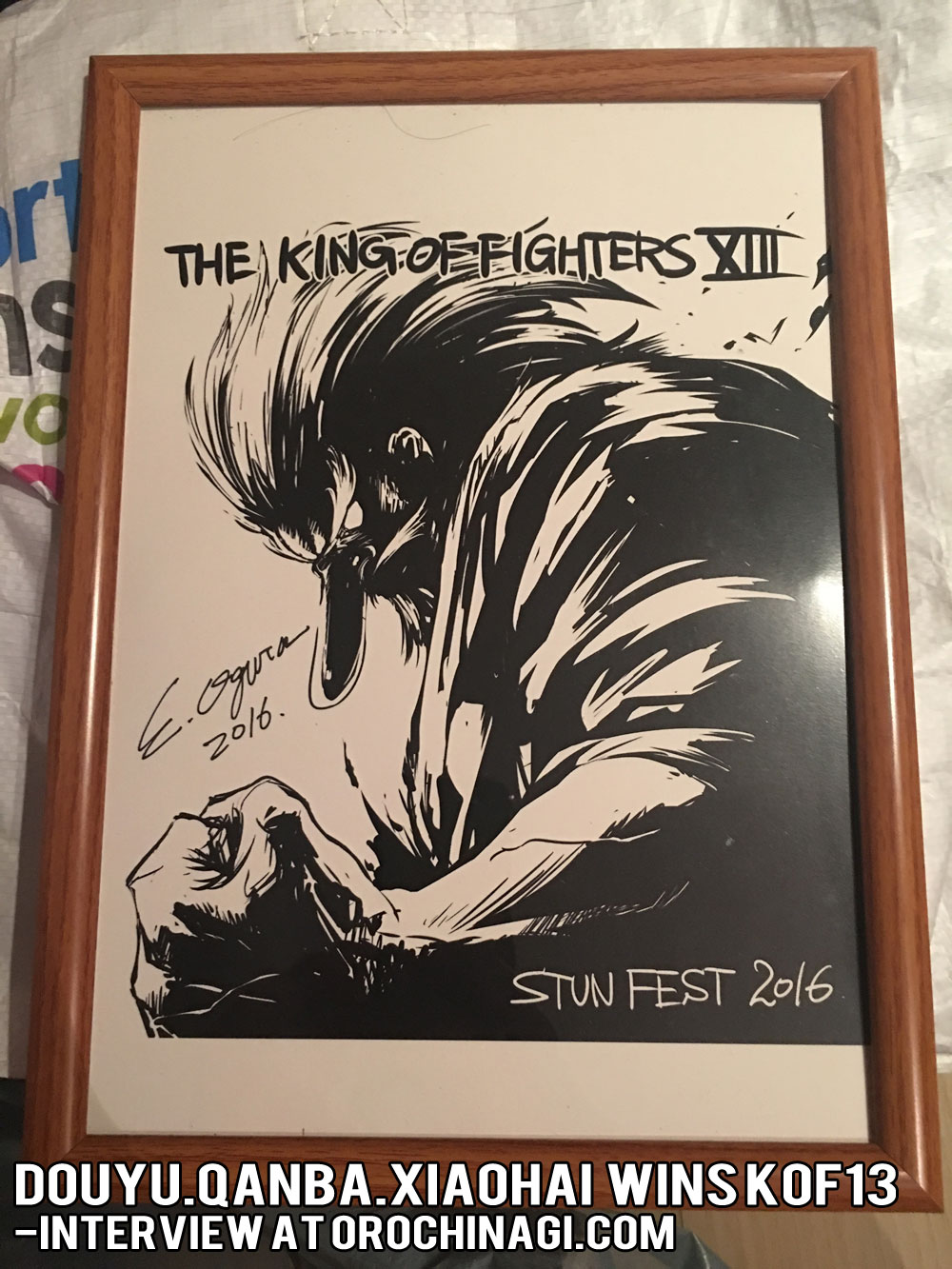 This is part 3 of our feedback from players.  Xiaohai gave an interview a while back after Stunfest and we’ve got some words from him after playing at CEO, so you can see the progression of his opinion. Here we think it’ll go well with exhibition videos and don’t forget to check the photos of his artwork prizes from Stunfest!

Many of these questions were taken from a Chinese interview translated by ALX.

Q: What score will you give KOF14 (from what you have played so far)?  What attracts you the most?  What can be improved?

KOF14 is an simplified version of KOF13, but there is one thing that’s really interesting: the order of character decides what combos you can do.

Since EX moves can only be used during activation, the first character has shorter activation meter and can cancel 2 EX moves, second one can cancel 3 and third one 4, the last character can do some really fancy combos.

So some characters suit first place more, someone second, and you really need to try them out before you decide which character goes in which order. This is the thing I find most interesting.

Which character do you like the most now? Will the system give him/her advantages and result in imbalance?

New character Luong, I like her the most. About the system, I would say all games are the same, unless players dig deep enough, it’s hard to really experience the advantage/disadvantage between characters given by the system. No matter 98UM, 02UM or KOF13, it’s all the same.

What do you say about the graphics?

The gameplay is okay, so if you don’t pay attention to the details, it’s okay. But during the super move cutscenes… that’s really… not that great…

After CEO and playing the 36 character build

So, how was the build at CEO?  Any differences?

The characters I play didn’t change. Nakoruru’s crouching C is very strong. That butler character interested me but I didn’t have a chance to play him.

What do you think SNK should change?

Any balance change is OK, but just don’t slow down the gameplay.  Indeed, (the jumps are floaty) and it downgrades the beauty of gameplay.  Running is fast though.  Actually, I’m fine with SNK slowing down the gameplay, but this floating jumping is unbearable.  Just keep what it is like in KOF13, but with better netcode, then it would be fine.  But it’s interesting that character order determines the length of activation meter, it’s a lot of fun.

So you would prefer KOF13 style jumps, regardless of whether they would be better for netcode or not?

That would be silly.  The floaty jump is an issue itself, which creates not solves the problem.

That was all he had to say on the matter.  While Xiaohai seems confident in his opinion, I’m not sure I can agree with this.  ALX (the translator) said “I felt jumping was kind of floating, even though video comparison showed KOF13 and KOF14 are actually the same” but in fact, if we look at the KOF13 and KOF14 jump comparison, in fact, this is not a good comparison from the start.  KOF13 on console and pc is faster than arcade.  Ok, well, maybe you never played arcade but that reduction in speed is significant when it comes to blocking.  I don’t think the higher console speed was a good idea.  KOF is a fast game; KOF hops are too fast for netcode.  From where I stand, overheads/ empty hops and even just hops make or break matches in many fighting games online.  People are blocking these things on reads, not on reaction.  On the other hand, with a good connection, sure, these things are blockable, but considering SFV has a 8frame inherent lag on top of everything else that can delay your input, wouldn’t a game that can be played in worse netcode conditions be universally more enjoyable?  I know I’d prefer losing life in a footsie game rather than an overhead-that-I-thought-I-blocked-into-70% combo.  The floaty jumps do not create a problem, they solve a problem.  They make the hops and jumps easier to react to.  I, and many other players, support this.

So, in the end, we have two things to consider: jumps which aren’t game breaking but cosmetically displeasing and netcode, which will decide if these jumps actually, really make a difference to gameplay. While everything else seems minimum okay with some elements becoming excellent, perhaps it is the netcode, that will really be the make or break of KOF14.  Will we have a beta?  Will there be a demo?  Questions remain to be answered!

ALX added his own thoughts:

“I like the activation system and climax moves.  Although I think I’ll hate on it if I play PvP matches, as the new activation is so brutal.  That damage is so over-the-top, one bar 50%!  I think wasting bars on super is like the last thing you gonna do in KOF14.  One thing for sure is that, I really want to see how top players make use of this activation system and turn KOF14 into slaughters. I think KOF14 might become like Hokuto no Ken, really really fun to watch, but never try it yourself…”  Note that the combo damage has been adjusted since this comment was made, so we believe people will be happier with the final tweaks in the retail build.  We look forward to it!

Xiaohai also sent me photos of the prizes he received from SNK at Stunfest.  Many thanks to him.  Check it out! CEO and Atlus now have uploaded footage from the events, featuring Romance, Mr KOF and more.  Check out their channels for more!

You’ll also get to see how strong Nakoruru seems to be in this build, or perhaps players don’t know how to punish her yet?