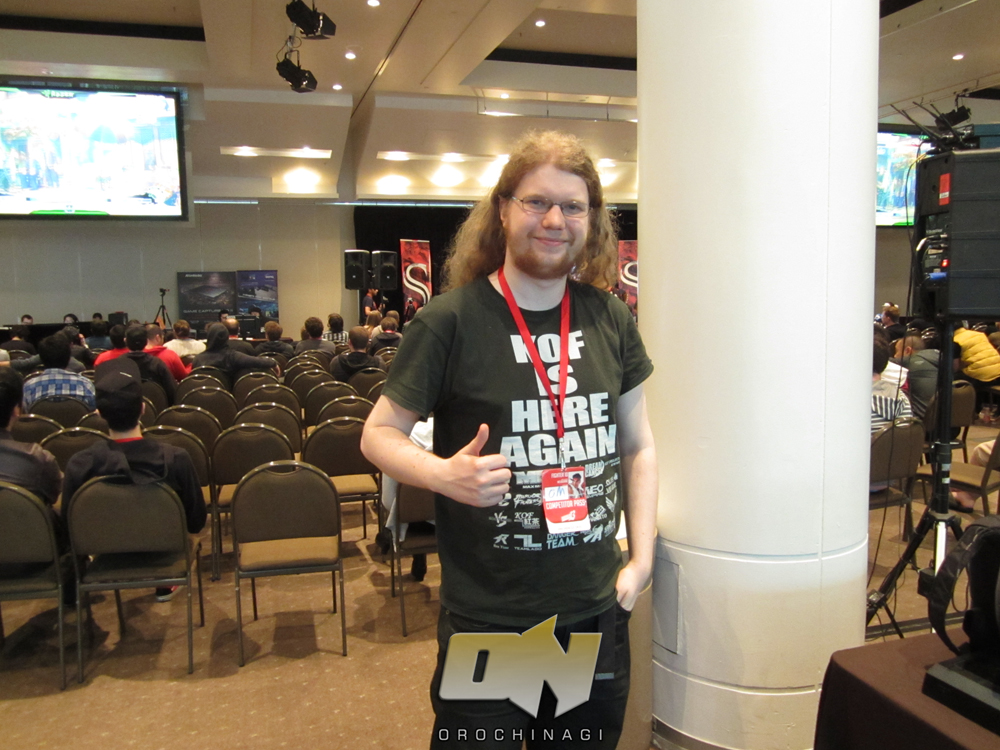 Shadowloo Showdown was such a good weekend, witnessing great players and heart pounding matches in KoF XIII. I was fortunate enough to meet BubblanAB7 and hit him up with some questions. DC: Hi BubblanAB7, great to finally meet you! Tell us a little bit about yourself.

BubblanAB7: Hi I’m bubblanAB7, I live in Sweden and I’ve been playing fighting games for a little over 5 years. I started out with Street Fighter: Third Strike and CvS2 but have since moved on to KoF XIII and Marvel.

DC: Is KoF XIII you first KoF game? If not, which KoF was?

BubblanAB7: KoF XIII is the first KoF i started playing seriously but i really like 98. I’m not that big a fan of 2k2 even though i kinda feel XIII is based off that.

DC: What made you want to pick up and play KoF XIII?

BubblanAB7: I really love SNK games for their design in general and I’ve always had an interest in KoF so when XIII came along it was a good chance for me to start getting into the series.

DC: Describe your local KoF scene. How many players you have? You have local meetup or tournaments?

BubblanAB7: We have a local hangout here in Stockholm were players meet up about twice a week (Wednesdays and Fridays if there are any Swedes reading this). For KoF, we have about 8 players in total playing. We usually only run smaller tournaments for the new games since that’s a good chance for newcomers to get introduced, people don’t tend to hang around for ranbats etc.

DC: What was the impact of KoF XIII: Steam Edition for you personally? Has your local scene changed for better or worse?

BubblanAB7: For me personally, it’s so much easier to record combo videos since I can do it by myself. KoF has been kinda dead outside of Stockholm because the netcode was so bad before and they had no local scene but I’ve been able to find new people who’re interested in playing and at least within Europe KoF XIII: Steam Edition feels almost like playing offline.

DC: You mentioned that your training partners are as good as you or maybe better. Who are they and do they travel?

BubblanAB7: First I have Yagami who’s currently the 2nd best in Sweden. He’s also a very strong SFIV player and he’d be a real threat in KoF XIII if he’d put more work into it. Then I also have Xzi who’s an old GG player but he doesn’t travel at all. For those who follow smashdrama and know who leffen is (the first guy to get banned from smash) he’s pretty much my pupil and I’m confident he’s gonna be a top player by next year.

DC: What made you want to play in tournaments? Have you won any?

BubblanAB7: Traveling is the absolutely best part about fighting games so I try to get to as many tournaments as possible. In KoF XIII, my best performance internationally is getting 3rd at the latest Red Fight District but I guess I’m more well known for my combo videos. In marvel I’ve won some tournaments internationally but I’m still looking to improve at KoF XIII and hopefully start winning eventually.

DC: Describe your typical training plan to ready yourself for tournaments?

BubblanAB7: Before a tournament i usually start practicing setups and look up how to beat certain moves while normally i tend to just practice combos.

DC: Do you watch vids or read any info from forums at all about characters or gameplay?

BubblanAB7: I tend to watch combo videos and tutorial videos a lot more than other stuff.

DC: In your opinion, who are the best 5 characters in the game and why?

BubblanAB7: First of all, I think Benimaru is near broken with the infinite. For point i think that Duo Lon is the best but he has issues once people get in on him. Then in no specific order I’d put EX Iori, Karate and Kim.

DC: Who are your worst 5 characters and why?

BubblanAB7: I think that Maxima, Mai, Leona and Mature are the weakest characters in the game and it’s all because their toolsets are so limited. It’s hard for those characters to adjust to certain matchups. While I feel that characters like K’ and Kula are also weak they at least have the tools necessary to win, just that they have to put down more work than the better characters.

DC: You mentioned that Benimaru is broken because of his infinite, do you believe having a high difficulty of doing the infinite is a fair trade off?

DC: In your 2 combo vids, you showcase his infinite as well as some hard combos with Ash. How long it take you to learn how make these vids?

BubblanAB7: The first video took me a really long time to make since i was just learning Benimarus infinite during that time so not counting the practice i spent at home i probably spent about 20 hours recording at my friends house, over 10 of which was that Ash combo. The second video didn’t take nearly as long and I probably spent 10 hours recording it by myself at home with Steam Edition. For the second video i didn’t have to spend that much time practicing I just went straight to recording it.

DC: In your opinion, who is the best player right now in KoF XIII?

BubblanAB7: When I played casuals with Tokido during Shadowloo Showdown he earned my respect as being the absolute best in the game after just demolishing me, hopefully he’ll start showing it in tournaments as well.

DC: Is this your first time to Australia? You enjoying it?

BubblanAB7: I’m loving it here, haven’t had time to check out the city but I’m having a great time just hanging out with the Aussies and other guys from all around the world.

DC: Would you comeback?

BubblanAB7: I’d love to make it back, have to win the next qualifier as well.

BubblanAB7: Huge shoutout to Veggey and Phenom and all the KoF players in Sweden.

DC: Thanks for your time and hope you have lots of success in the future.

Be sure to check out BubblanAB7 Youtube page for his quality combo vids and more future releases. Also check out his Money Match with Xian pre-SS2k13 below.