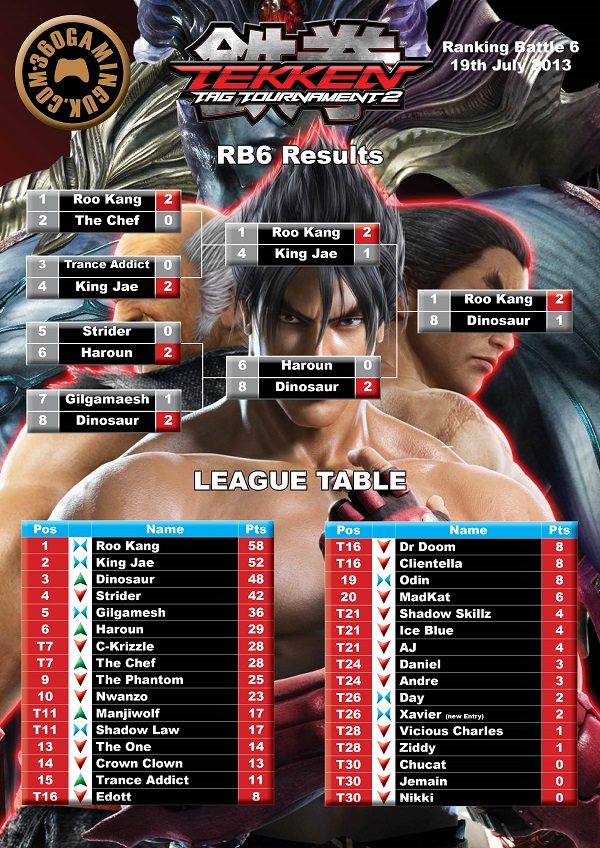 Ok we are finally at the end of the first season of 360Gaming’s Tekken Tag 2 Ranking Battle!

It was a long hard fought war between veterans and up-and-comers alike, but with the battlefield littered with many bodies, we finally have a body count and final result at the end of it.

For the currently ranking no. 1 & 2, i.e. the aggressive animal Roo Kang, and the King himself, King Jae, the battle is not quite over yet!!

They have to go one-on-one again in a “Ranking Battle Final” will be to decide the first two ranks once and for all, and see who is truly at the top of the mountain!!!
The true King of the Ranking Battle will also walk away with £100 cash as a prize!!

It will be held at the EPIC 360GamingUK TTT2 Major this Saturday!!!!
That itself will be an event you DO NOT want to miss!!!

Many thanks to all the warriors who have attended the Ranking Battle season, and gained much fighting experience whilst doing so.

Videos of the season finale are also below: