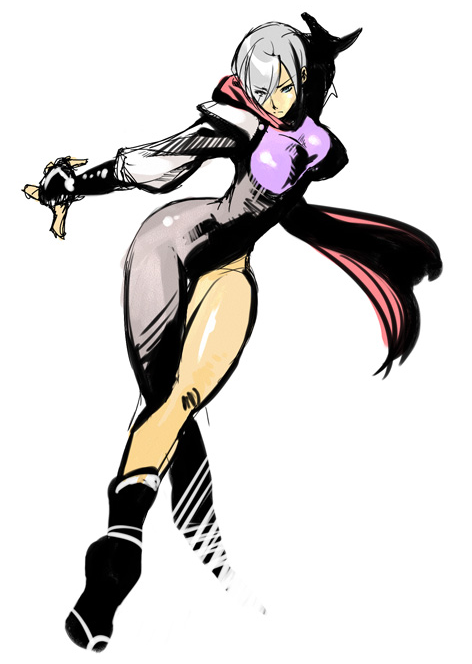 We had a chance to offer some questions in an interview with Hotapen, where they talk about their aims, plans, mechanics complexity, the doujin scene and Higurashi No Nako Koro Ni, thanks to Rice Digital.  See if you can guess which questions come from us xD There is a distinct feeling of Street Fighter Third Strike in Yatagaras – was this intentional?

Of course it was. 3rdStrike is a great game, and it surely influenced us largely in making Yatagarasu.

Were there any other fighting games that influenced you in making Yatagarasu?

3rdStrike and the KOF series had the biggest influence on Yatagarasu.  However, we do not want to reproduce exactly the same thing as those games.
I think what actually had the biggest influence on me is the whole experience in playing a lot of games throughout my life, rather than an individual title.  I got to know what I found interesting, through playing a range of games and through my experiences in daily life, and I think Yatagarasu is the output of all those experiences.

What was your main goal for Yatagarasu? What did you try to achieve to make it different from other fighting games?

Some of our hopes are to get the game to be played in arcades, and to get involved in big game tournaments like EVO and Tougeki.  But this is not necessarily for a financial success.  It would be great if we could achieve this as a result of getting lots of people to enjoy our game.
It is difficult to say what our main goal is.
The most important thing for us to make this game was to enjoy the process of making it.
Yatagarasu is a game created by individuals, not by a company.  What made us to decide to make this game was our desire to enjoy making a game itself, and to create something we really wanted to.
Therefore, there is not one particular goal that we aim to achieve.  We would be happy as long as we can enjoy creating the game, and also people enjoy what we make.
(Probably game companies may have these sorts of ideas as well, but I guess it’s not their priority to think about whether or not the creator is actually enjoying making the game.)

In terms of the content of the game, Yatagarasu, we are intentionally featuring effects that would have seen in games from older generations.  This is because we want to take anything that we think is good, regardless whether it’s new or old.  Rather than aiming to achieve a financial success, we put priority in doing what we really want to.

Another factor I think is the existence of fighting game tournaments like EVO and Tougeki, which still continuously took place regularly even when the genre’s popularity was on the wane.
Also there is a fact that anyone can access to video sharing websites where they can see the fighting scenes from the game.  I personally watch them often as well.

Do you think fighting games should become increasingly more complicated – or should they try to be more accessible to new users?

I think there is no one particular answer to this.
No developer would be unhappy with getting more of an audience, I guess everyone wants to get more users to access their games.  However, it is a different matter whether the game is actually interesting, if it was made in a way that everyone would like it.
You wouldn’t be able to make an interesting game if you don’t clearly decide who your target is.
It also depends on what the maker’s situation is like – companies make their games as business, so they would try to target a range of people, whereas the majority of individuals are not making their games for financial purposes.  Therefore the latter would not need to set sales quotas, and would be able to target more specific audiences.

You’re making a new version ‘Attack on Cataclysm’ – can you tell us what will be different and improved?
The biggest feature this time is the fact that we are raising funding for game development through “IndieGoGo”.  The quality of development will depend on the amount of funding we get, so your donation would be appreciated.  We have a range of presents depending how much you donate for us.
In terms of the content of the game, there will be more characters to be added.  Keep your eye on the IndieGoGo website for more details.

I think Hanzo needs to be able to do Dive Kicks from any height! Can you please change this! 🙂
I will pass this on to the person in charge.  I think this is unlikely to be achieved though ;P

Will you continue to make new versions of Yatagarasu, or would you like to work on a new fighting game?
There is a lot more we want to do with Yatagarasu, but also we would love to make a new fighting game as well.  However, since we are a small team, it is unfortunately impossible for us to do many different things at the same time.  For now we want to be concentrating on developing “Yatagarasu Attack on Cataclysm”.
At least we are sure that we’re going to continue making fighting games.

Yataragasu has been well received by the western Fighting Game Community – has this surprised you?
It has indeed surprised us.  As we are such a small team, there is no way that we could export our game overseas.  So we are very pleased that there are lots of players in Europe who enjoy our game.  We will continue to make games in the future, so it would be great if you could keep checking us out.
We rarely know anything about the game scene in Europe, so reports from Rice Digital are a great source for us to know about the European scene.

By the way, Japan Expo in France is very well known in Japan.  We are hoping to go there one day.

The doujin scene is not well known in the West – can you tell us a little about how Hotapen began life?
Hotapen was formed by people who wanted to do something that we couldn’t do in a game company.

In Japan, there are certain events where only indie games are sold, such as “Comic Market”, as well as doujin shops like “Melon Books” and “Tora no ana”.
Because of these, developers can distribute indie games to the consumers quite easily.
They can also communicate with the audience directly there, so these events work as a lively market where developers and users can both enjoy.
Because of this, there are a lot of groups of individuals in Japan who make games themselves, and they are called “doujin soft circle”.

These titles below are not too popular, but they are very good games.
『ＤＡＹｓ』(http://greenteamilk.net/days/)
『CIRCLE OF THE DEAD 』(http://circle-of-the-dead.net/)

There was a meeting among doujin developers in Japan recently called ‘BitSummit’ – what did you think of it?
I think it is a great event.  The existence of small teams of developers, like ourselves, is not well known, so this kind of event would be a good opportunity to get known by people.  I only went there once, but it was a very enjoyable event.  However, I’m not sure if there was any benefit for the organiser from having this event.  If we desire this event to take place continuously, we would need to think more about the organiser’s benefit.

Would you like to see more doujin developer events like that?
Yes I would.  This kind of event is a good opportunity for promotion, and to communicate with audience and with other developers.

What do you think the doujin scene needs to do to break out of Japan and be more popular in the West?
In Japan, Comic Market and doujin shops are working very well in the indie scene, but it suddenly gets difficult if we want to achieve more than that. (For example, marketing, stepping into overseas scenes and so on.)
It would be much more achievable if there were some kind of systems that support those kind of things.  I’m hoping Rice Digital could play a role as a part of that.

If you would like to support Hotapen, not forgetting they’ve just announced James Chen as first English language commentator and inclusion of GGPO netcode as part of their goals, head over to their project page.  They are about to hit 20K but there’s only 37 days left!!! If you’re looking for more Yatagarasu action and tutorials, stay tuned!  We will also planning to stream our Team Battle at Arcade Street on Friday the 26th July and grand tournament on the 10th August, with prizes supplied by Rice Digital /Nyu Media/ Hotapen!!!

If you haven’t already picked up the game, hop over to Rice Digital! And check our movelist and tips here.