I get some practice with a friend and plan my attack with Kyo and getting that crossup dwn C to hit with a HD 2bar combo. Still not confident enough with it, so I decide to save it for Clark.  I remember that Kyo’s cr C is a good anti air and so made a mental note to use it rather than mess up a DP C.

Headed down to Shinjuku Carnival and just make it for registration.  Lol it’s not like other countries – players here have respect and register on time.  Well, let’s put it this way, they weren’t late.

The tournament here is double elim but not as you know it.  I think they took top 8 from the first bracket and then top 8 from the second bracket … or something like that.

To cut a long story short I pretty much choked all day with Kyo and Clark and dropped vital combos with Iori and died twice.  The second match was particularly irritating as I missed a scum gale > qcb D juggle and then got a jump CD from the opponent’s Clark to finish me off.   Bleh.  But hey, we all know this story! You need to play more tournaments to get used to the pressure.

I had to leave after my turns to go check out Alpha Station before it closed.  Kuso was not amused having to waste his day off not being able to play XIII.  He would have entered the tournament but he overslept and missed registration.

Before I left, Haregoro had been knocked out and sent to losers brackets! He always seems to fall to another Shen user…  Shoki was playing too, lots of players, the KOF area was pretty packed out.  I noted that they were very specific KOF machines. 98, 2002, XI and 2002um.  I think there was a Nesica machine with 98FE on it but er… it wasn’t really getting played.  Between rounds, ppl were playing all the other KOFs.  Dunno how they manage the transition between timing… I certainly can’t.  Note that Sonson said at this point he was a fan of XI…. interesting… but no thank you. 13 or nothing!

I must thank Nagihey for organising the tournament and running it, it was a great experience, and I think he travels from Yokohama!

When I returned from Alpha Station, I had missed the finals, but people were sticking around for casuals. I got better at casuals, and much better performance with characters that don’t require fast input such as Maxima, Billy and Ash.  Kyo takes way more spacing knowledge and fast running, you need to be brave (and accurate!) with Kyo to win.  Win wise, this was the worst day, I didn’t win a single match.  I consoled myself with the fact that at least my opponents were Oogosho, Cap, Koukou, Mari-chan and Haregoro.  There were a few players around my skill level who helped feed the beasts their meat for combo practice… it was not pretty.

Note I made a mistake in my last observation, I thought I saw Karate cancel a sweep into jump but that is incorrect.  Mr Karate can cancel his normal moves into hyper jumps, so if opponent gets swept, he can hyper jump away or up or forward.  It means he can defend and continue offense with jump CD or .. whatever.  He is a total git. Being fast enough to decide to jump rather than cancel into qcf A… uhhh

The whole drive cancelling dp thing is not new to XIII and many other characters make use of such cancels to extend combos.  Kensou and Robert in particular drive cancel their anti airs into combos that can link into DMs like Karate, but normally just in the corner.  These could be improved, it’s the thinking of drive cancelling from an anti air to lead to a dm rather than saving it for a combo that requires studying.  Would it be as simple or as damaging as Karate? Well Kim can do it, there’s probably lots of opportunities, just need to take a look and revise your thinking.  It may well be worth it.

This is the next big thing that needs to be learnt. When you come up against an opponent that has an invincible anti air with the reaction speed to use them, this is an excellent tool that will give you a free combo.  This is not to be confused with an empty hop- the opponent needs to see your leg outstretched so that they believe an anti air is going to hit.  The timing is really strict though.

If Cap hadn’t fooled me with this, my Ash would have lived a lot longer…

Countering it is easy, just block… but can you resist?

Good grief you need fast reflxes.  But it’s not that bad.  Ryo’s parry was made faster for console but I figured whoopee so what I can parry and throw- but that’s not how you’re meant to use it.  You’re meant to press forward to parry then cancel the parry into a dp with dwn, dwn- fwd A… or qcb BD… why BD you ask? Not sure yet tbh.

You know how Kyo, Iori, Ryo and Duo Lon have great cr Cs?

When you’re stuck in the corner, faced with a hopping opponent, a cr C is a nice safe choice- not.  Especially if you’re predicting rather than reacting.  As the opponent leaves the air and you mash that C button, it whiffs in the empty air because the opponent JUMPED.

To recap: be careful with predictive patterns lol, and if a player is using crouching Cs… jump (corner only).

More to come, in the meantime check out some casuals featuring Oogosho beasting with Chin. The match where he ocv’d me strangely got corrupted. And I still swear I stood up when I saw the overhead coming.

But what’s this! A wild Haregoro appears!

Some pics after the tournament

from the left nagihey koukou jackal osugineko yanagi.  These guys are cool! (^_^)b

Thx to Koukou-san for help with names.

Oogosho. Had a little chat with him, he’s cool. 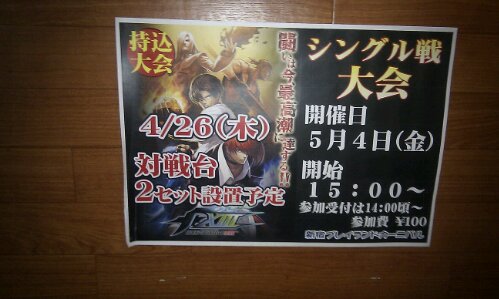 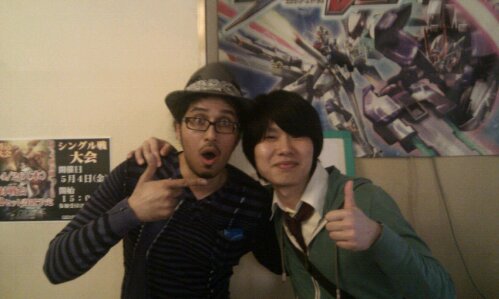 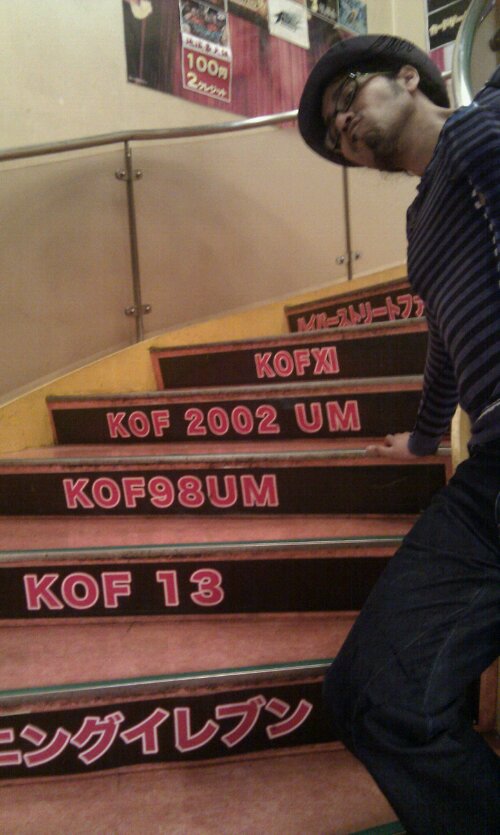