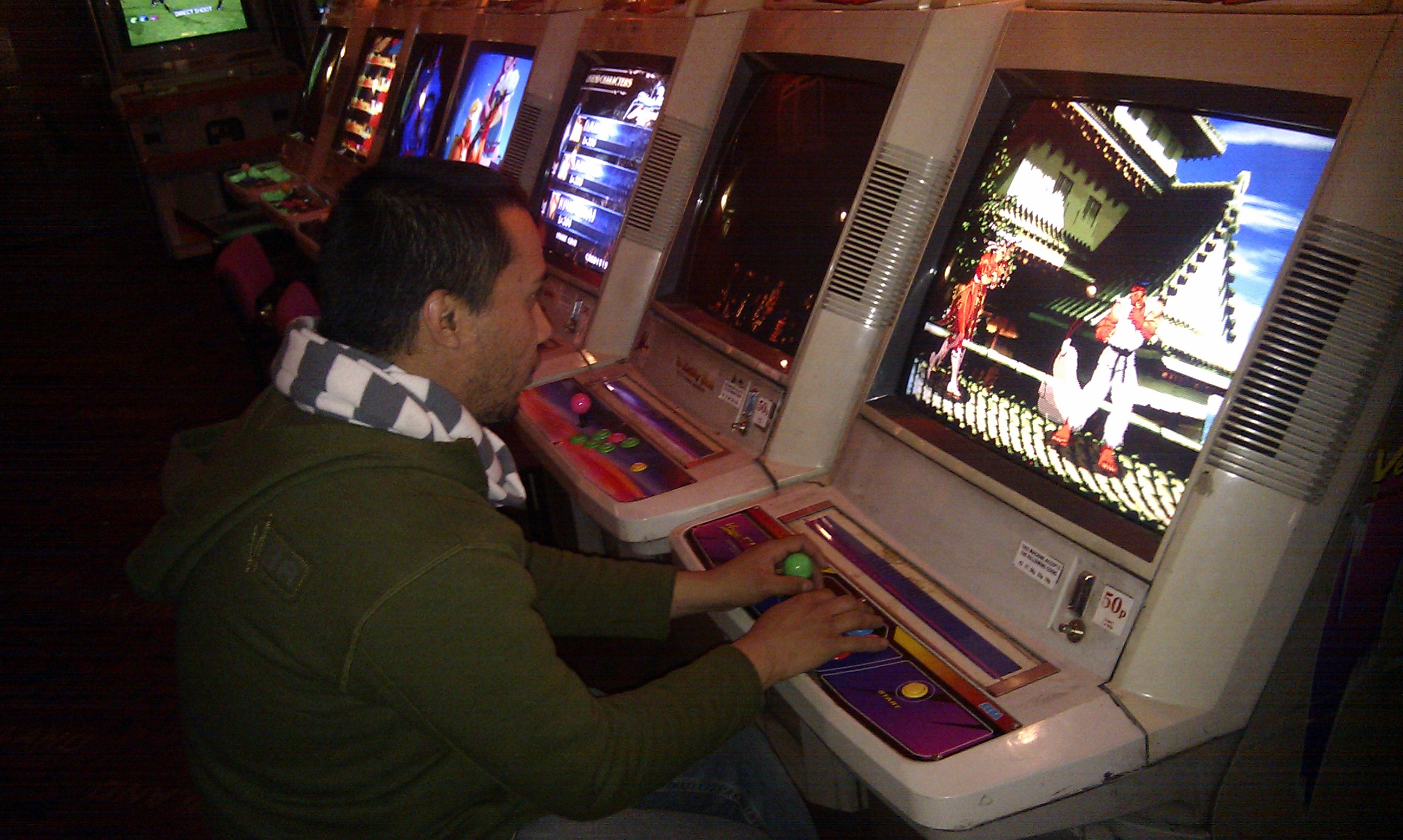 On a round trip from the US to Spain, Penny flew down to London with a friend and called me up for a drink.  Of course, for the first time in weeks, it began to rain.

So we took a quick run around London’s major arcades. As we met in Picadilly, we went to Trocadero. I’m not even sure if it’s still called Funland, but it’s still got a little fighters corner, with 3s, NGBC, SVC Chaos and of course SFIV. It was a week night so I wasn’t suprised to see it empty.

I didn’t want to go to Casino @ Goodge St because I knew we would never leave and they should get some sightseeing while they were here. 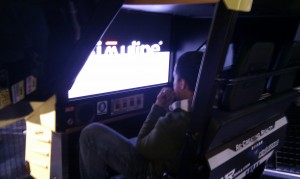 Off to see Big Ben, so I dragged them into Namco Station. This really was a tourist trap- it was mostly virtual rides and music games, no fighters in sight, although I was then astounded to see a Tekken machine. Oh wait, this is Namco station lol. 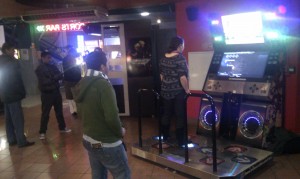 DDR - still not stamped out

DDR still seems to be doing well (with arcades having at least two machines) along with other music games such as Guitar Hero. I was shocked to see that GH arcade involves playing one song only per credit, and that certain songs required TWO.

I decided to give Penny an interview:

Well I’m known as penny around the web. I’m a retired player that has been organizing tournaments in north mexico for a while up until last year when things got out of hands due to the cartel wars.
my last event that i organized was held in el paso texas we called it Nouveau Defi Prologue or Nouveau Defi: Rebirth, it went under either name. It was an event I was holding to celebrate the release of XII and to start having mexican players over to the states, a small step, but nonetheless significant.

I started in neo-geo.com years back, and always ended up there even when i was just looking for combo vids, until we found white-tower (one of the oldest combo vid websites and has been down for almost 10 years or so). After that site went down, I ended up in orochinagi message boards, then ended up in neo geo due to the merger and stayed there. I never really liked the way orochinagi was moderated and i really found a lot of topics really funny in neo geo.

Orochinagi is certainly not known for spam and free-for-alls.  Anyway, so what happened next with you?

After being a big fan of combo vids online, I started a project under the name of tournament protocol, it was a website that had a map of the world, and you would click on a country and it would then give you a list of tournaments being held there. The idea was going fine, but the web designer took forever and i went on from that. From there on we founded cmvarchives.com a non http site, where we share combo vids via ftp. it’s a really select group of people, but the main idea outside hosting combo vids (we ran into a problem since it was not a dedicated server and ended up with high traffic), the idea was to host homework for people interested inthe project and make it easier for everyone. If you had an idea we could have worked with it, it was really open to any opinion, unfortunately noone really enforced it, and although the project is still going on, more websites like youtube have become a good source for hosting combo vids in recent years.

Indeed.  So are combo videos your thing or is there anything else?

What are the arcades like where you are now?

I left the arcade scene in mexico in 2003 and left for college, i know one of the best arcades in Juarez, Mexico (Fantasy) closed down in 2003 or 2002, i don’t remember exactly which year, but it was either or. from there everyone moved to Scape in Plaza de las Americas. However, in general, most arcades have become extinct. they went from PC’s with a shitload of roms and horrible controls, to modded xbox’s with time release. Other than that, i know there have been projects about modded 360s and what not, but i’ve been out of the loop in Mexico when it comes to arcades. I do know however that hacked versions of 2002 are still very popular with little kids.

It’s pretty funny but being a kid from the 90s and a kid with no consoles and only arcades during the 16 bit days, I found it interesting how in Mexico Kyo, Iori, and Rugal were at some point as popular as Mario or Mickey Mouse. Now, or rather since 08 (last time i went) i have no idea how the gaming situation is.

How is the KOF scene there?

What i’ve been seeing in the KoF scene is that it has become more international. Meaning that with new technologies like the internet, names like Hummer, Uguisu, and M’, from Japan are known like Guason, Joker, or benji in peru, or like Luis cha, kula, osmani, a-nd abraham in mexico, or like buchecha in Brasil.

In juarez, we’ve had the honor to have one japanese visitor to come. and the same goes for Mexico City. There were arrangments for another player to come, but it didn’t happen due to protective measures. The talks between mexico and Japan have started and so far are going step by step, but it’ll take a little bit more to make something bigger. Although Mexican players are good at hosting, my personal opinion is that they need to start traveling overseas (whether it’s south america, europe, or Asia).

With the release of Street Fighter IV, there has abeen a bit of a decline, the game is really good let’s face it. and a few players (in brasil and mexico) have almost left KoF complete for Street fighter and it’s online component via xbox live. A few others are still playing in GGPO, but i don’t have numbers for that.

The fact that the UM versions of KOF weren’t released in MVS surely hurt the scene in mexico to stay behind the times, and the same goes for XII and will be for XIII, it’s not going to change no matter how good the game, they are just not going to have a wide reception like they did in the 90s. Now that SNKPlaymore has started to get a bit closer to the scene, maybe we can do something about making international tournaments with them, but only time will tell.

In the US they recently became involved (SNKP) with SoCal Regionals, it’s a little step into a better future and hopefully they do more events like t his for future KoF’s. And not only in the states but also in other countries were KoF was an icon. There is a decent scene in SoCal with guys like Mr. KoF (very good player BTW in XI). and hopefully more players like him make a name for KoF further on in the states.

Did you say you placed 2nd in a SF tourney? What happened there?

I didn’t place 2nd in a SF tournament. I placed 2nd in an SVC Chaos tournament in Virginia. It was kinda sad, it was a Namco arcade, they only had SVC Chaos and tekken 5 Dark left. I talked to the guy that ran the arcade and he told me that in 07 (i believe) namco auction most of its arcades. and that arcade lost some of the most popular (for the market) arcades (like MVC2, third strike, and CVS2). Which hurt them pretty bad. The SVC Chaos tournament they just did it cause that’s all they could do. i went there and placed 2nd to my surprise, I could have placed 1st, but kept playing without knowing I was still playing for 1st (i came back from losers and lost again), it was a fun experience. And after that the gamer’s invited me to their weekly get togethers, and i know they are really good gamers when it comes to their game of specialty. Matter of fact Ryry (one of the gamers and the guy who i played for 1st in chaos) placed 7th in Tekken in Evo this year. So I know the Virginia players are really good or at least have some potential.

How do you feel about KOF XIII?

Well, I personally like XII, i haven’t had the pleasure to play that game more than i would want to. However I like the concept. My only critics are that they should have went on with the garou timeline, even though they went back to basics, I think a little bit of Garou would have helped them more. I really like the solid gameplay, but that’s it the game fails on a 1 player experience, but if you have people to play with it can be fun as hell.

XIII seems to be going on a good direction, the update for the arcade release is a good sign that playmore is paying attention to its players, im guessing it got some beef for its special rule during tougeki. and althoug 02UM is a mess from what i’ve heard about it on live arcade, hopefully they can fix it (02Um is another game i havent played). But XIII looks like a good promise. And just like Namco and capcom surprised us with Namco X Capcom, i would mind seeing an arc sys vs SNKP using the KOFXII engine. SNKP could use a vs game with a good developer (examu, and arc system seem like a good choice).

Well, thanks for taking the time to answer my questions.  Any shoutouts?

My shoutouts go to all the Crew of KoF juarez, and Newground Team in Juarez.. I’ve worked with both teams, both awesome teams, and I’d like to give a special shoutout to Team Lago, a team based in Tijuana, which I’d like to work with in the future…