Seriously, there is a reason for this image.

What links KOF XIII to Orochinagi?  Star Trek.  Huh?  How so?  Did you know that ON uses a font called Klingon Blade?  I had no idea at the time that it was actually THAT kind of Klingon.  The question remains, why does the XIII logo use the Star Trek font in the first place?  I mean, WHY?  Are we bringing in aliens?  Don’t forget in KOF MI2, the boss WAS an alien (thanks Falcoon… now please stop taking those drugs)…  Perhaps SNK designers have been checking this site out and subconsciously were inspired.  What?  A game company reading a fan site?  Yes, it’s a disturbing thought.  Good thing I deleted all those mp3s.  Otherwise, why would a company look up a fan site?

Considering the lack of communication, it’s easy to assume SNKP don’t really care about gaijin. I wouldn’t be surprised that they don’t care for Orochinagi.com’s opinion, although we’re not quite the dirty thieving emulating gaijin type that some make us out to be. Okay, well, I didn’t ban anyone for saying they used emulators, but we never provided roms or anything like that.  From a business point of view, as a horde of perhaps not exactly paying customers, our feedback could be seen as moot.

Then again, if you wanted to gauge the overseas market for KOF, well, have you seen any other English KOF sites recently? South America has a good few but er… hmm yeah, English KOF sites are a bit rare these days. ON and CX are the last standing old skool KOF specialists.  It’s retarded to say SNKP don’t care about gaijin opinion, otherwise they wouldn’t make English versions of their websites, even if it is in Engrish.  I expect they are watching.  Perhaps they don’t really understand what I’m saying, and use babelfish, but I suspect somebody there wishes they could.  It’s a mutual feeling, eh?

Now, if you were SNK, how would you feel when you saw the amount of fan sites dying off?  Happy to see the emu sites go down, obviously, but what do you do about your fanbase losing interest?  Gaijin fans are better than no fans, right?  Perhaps SNK should start giving the fans what they want.  While digging around for XIII news, it surprises me how Mai still has a lot of fans across the world.  Still?  I mean, come on.  She hasn’t even had a costume change (Alternate MI costumes don’t count)!  However, what the fans want, the fans should get.  SNKP have been looking to give Mai the boot, or at least test her popularity, and she was removed from XI.  This is the first time we heard the phrase “No Mai, no buy”.  Was this merely a marketing ploy?  Mai returned as a bonus character for XI on the PS2, along with Robert and a few others.  Did SNKP ask us which characters we wanted?  Perhaps they didn’t care.  Which brings me to my main point-

I believe SNK are now watching the western fans.  Perhaps they don’t even like us, but considering the support the western fanbase has been giving to XII, while the Japanese home crowd turned their nose up at it, I wouldn’t be suprised if they are trying to figure out how best to please us (i.e. to guarantee sales).  It’s a shame Ignition have been gagged (that’s business politics for you) so I imagine the channels for communication are as clogged as ever, and so the voice of reason (i.e. Orochinagi.com) gets lost amongst the ridiculous outcries for fanservice and Terry Bogard’s overhead.  Above all else, one thing has been made clear – the fans want Mai.

Considering the state of things and the assumed gaijin influence, I will be rather shocked to not see Mai in XIII.  Sometimes giving the fans what they want can ruin the product and creator’s intention.  However, if the fans don’t buy the product… well, you don’t have to be measurement fetishist to figure it out. 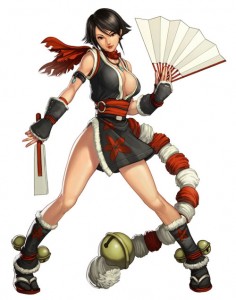 Here’s what I think SNK need to have in place for XIII to have a successful run:

1. Once you realise the Japanese homecrowd with their 24mb connections can’t be relied on to buy the game, SNKP has to cater for gaijin, with their sub par internet connections.  Make the gaijin happy, or die.

2. KOF has always had a good story, but you don’t have to go to great lengths, look at SFIV.  More important is a goal, a climax, and a boss character gives you something to aim for, a motive to continue playing; a tension while playing, much more than an improved lap time.

3. The practice mode was pretty good, especially with the dummy and 2P control, but a challenge mode gives the game so much more replay value.  After I defeated the boss and completed the challenge mode for 98UM, considering I couldn’t play online, I simply put the game away.  The number of challenges need to be vastly increased – character specific and involve all their staple combos.

4. Throwing out Mature and Elizabeth at the start just killed more potential replay value again.  I’m not sure SNK should try to make us pay for extra characters but on the other hand, as outraged people get, when they want to compete and show off, they will spend money.  More money = more artists to hire to get the 2D work done.  So put in Mai.  I don’t particularly care for her, but if that’s what the fans want, then get going.  I’d personally recommend a new costume, and if SNKP are catering for a western crowd, please bear in mind, we’re not paedophiles – we don’t want a 14 year old version.  We like characters like Angel and Shermie.  These are not skinny women, they have full figures and good old fashioned large breasts.

5. Asking for alternative costumes, considering the time it took to animate the 2d hand drawn sprites, is just unrealistic.  I’d pay for some colour schemes though.  Black with silver hair is always cool.  A red gi with blonde hair?  Now come on, I can understand parody or trying to make SF noobs feel more at home, but parodying Ken is beneath Ryo and when noobs see the colour scheme they only shout “It’s a copy of Ken!  This game is shit!”

6. While the 360 still suffers from piracy, a whole load of PS3 owners bought the full price retail, some even going as far (yes I mean Gunsmith) to pre-order the US version.  Many many users felt ripped off after receiving, let’s face it, an unfinished game, of KOF 97 proportions.  What happened to that Brazil stage?  The soundtracks came far, far too late.  Fans are swearing not to pay a further cent.  Trading in, or selling off your game now hurts game companies, as the potential for DLC revenue goes down the toilet.  If SNKP want to bring these fans back, they need to repay them for the investment they put into XII.  Some sort of unlckable bonus for still having the orginal disc would be a good step.

That’s enough for now.  I’m feeling my Orochi blood start to boil.  Lots of expectations for XIII, but looking at the track record, I’m not holding my breath.  It’s make or break time… what I’ve recommended isn’t just my opinion, it’s what fans all over are saying.  SNKP, if you fail, don’t tell us you didn’t hear the warnings… it’s not just here, it’s everywhere you look.  If you keep your head in the sand, you will suffocate.