Site Update: Gallery restoration is in place as you can tell- much more to come. Capcom Design Works and Falcoon Collection re-added, amongst others. 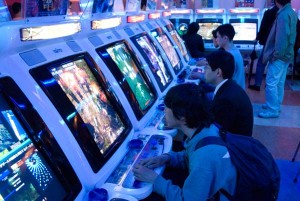 I’m putting together a guide to Akihabara, and the major arcades of Japan – I kid you not, I’ve just visited at least two of the most well known there.  I got my ass handed to me, although I have a completely reasonable yet pathetic excuse (I had never actually played 2k2UM before!).  I also got some wins, but more about that later.

What I want to tell you is something that should come as no surprise but you may find saddening none the less.

Arcades are dying in Japan.

I last visited Japan in 2000.  It was a SNK freak’s dream, not to mention a happy time for owning a Dreamcast.  This summer, 2009, I visited Tokyo, Kyoto and Osaka.  All over, Pachinko halls have replaced arcades, and those that remain are filled with crane machines and er…. pachinko machines.  There are of course the hardcore joints such as Taito’s Hey Arcade in Akiba and a-cho in Kyoto but these are not quite as busy as I remember, nearly ten years ago.  I’m not talking about visiting at 10 am on a Monday, I mean 7pm and onwards- the busiest time being Saturday night and this busting one night a week can’t possibly compensate for the other empty six.

Of course it depends on the players and the games.  In Hey, there’s a 10 yen corner with ST and 98.  Of course it’s constantly occupied.  The sticks are more than a bit fuckin worn (excuse #1) but what’s more surprising is that the full price 98 still has people playing it while the 98 UM machine has one guy spamming Krauser and nobody really that bothered to take him off.  Two out of four SFIV machines are being played.  Up in Ueno in Asore, nobody’s playing it at all.  KOF2k2UM is in constant play but there are only two machines in Akiba, with one in Kyoto.  Fatal Fury Special is still going through a revival, which brings me to another point- you may have wondered what brought SFIV back to basics, rather than some super duper new generation X system.  I think the feeling is that there is no new generation.

Next door at Club Sega, they only have VFR machines and people are going nuts, same for T6, but it still seems to be the same fans, the same people.  No new blood.  Even the new Gundam game that seems to be more popular than all these fighters put together, is played by white collar workers- in other words, us.  After finishing education and getting a job, we’re still playing games.

What’s stopping us from playing online may well be the only reason arcades are still open: tournaments, family members slowing down connections, or simply not wanting to go home.

I’ve seen some great arcades and some dingy arcades, individual reports will go into the wiki – these days may well be their last.  Is this really a bad thing?  So I stay at home and rage at my screen cursing lag and practically racist netcode instead of sitting in a smoky arcade giving the occasional nod to my opponent.  Human interaction, who needs it?  It’s all over man, no more extra travel fare and waiting for the toilet.  Give us spectator rooms with mass live chat and we will be done.  All we need to do is sort out the lag…