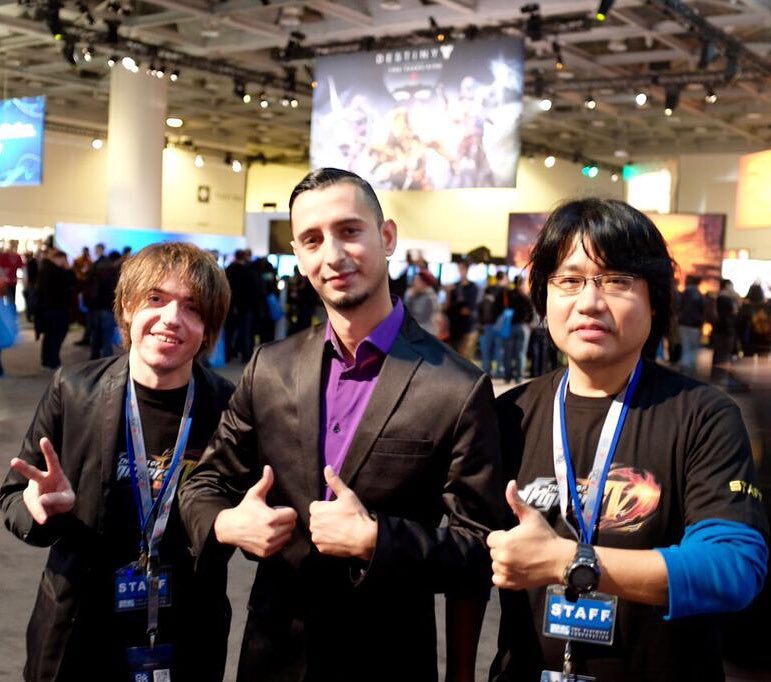 The producer of KOFXIV, Yasuyuki Oda, pictured here with Adam Laatz (Manager, North American & European Business Dept.) and Romance (who by the way has his impressions of the game up at EH -link at bottom),
has given an interview with Famitsu. Professor from MMCAFE has just now completed the translation (earlier posts on other sites were from a 40% complete draft). Summary:
– All 50 characters will be playable at launch/release. Full roster is already chosen.
– No plans for DLC (wut)
– All voices have already been recorded. Some VAs will be different from before due to various circumstances.
– Online will feature a 3on3 mode where 6 players each control a character when it’s their turn. Same characters will be allowed (at current planning stage)
– Development went full throttle in spring 2014.
– Project started out after company CEO (Kawasaki?) suddenly said in 2013, “We’re gonna be #1 in [fighting] games again!“.
– Oda comes from the former SNK R&D Division 1, aka the “Fatal Fury/AOF dev team”.
– A bunch of other staff from R&D Division 1 have also returned to work on the game; the dev team is a mix of seasoned and new staff
– All the returning staff have been active on other games recently.
– Game is returning to its roots in terms of graphics with “sharp looks on the characters”
– Attention is being given to game balance and controls
– Offline and online modes are priority, with story mode/ one player experience just behind
– They have “plenty of time”
– Some of the new characters would have been “infuriating” to do in 2d pixel art.
– They wanted to give the roster a regional feel again, like KOF 94
– Online mode is being designed with esports/streaming in mind, with interactive features to keep viewers entertained
– Whether game will be updated by versions (ala SF4) or go by sequels (KOF15,16) is still undecided, but it’ll be the beginning of another new saga in terms of storyline.

You can read Romance’s experience here, where he talks about how he doesn’t like the Persona 4 style auto combo, the floaty jumps and more!