ON.Tortita posted this link to an article about the launch of KOF98OL.

Full translation: Thanks to ALX

Reporter: TGS “KOF 14” – after the announcement, due to changes to the protagonist Kyo Kusanagi and Iori Yagami, there was a lot of controversy, many players have talked about the classic image – how do you see this?
Yasuyuki Oda: We also received a variety of comments from fans there. KOF XIV is another new chapter after the Ash saga, so the character design also takes a long time for testing and discussion. Through the story and integration with other characters and other aspects of discussions, the design changes. Although it seems not the same, as long as the actual gameplay of Kyo Kusanagi or Iori Yagami is intact, I believe fans will soon find a familiar feeling. Reporter: would like to ask, how many characters will be in The King of Fighters 14?
Yasuyuki Oda: Sorry. On this point we cannot disclose anything, but as said earlier, the new work will inherit the DNA of the KOF series with the characters of all unique personalities, so please look forward to it!
Reporter: In the KOF series, which is personally most satisfying to you? What is the reason?
Yasuyuki Oda: I personally still like “KOF’94”, even compared to the current KOF works we have been accustomed to. At the time, when “Fatal Fury”, “Art of Fighting” and other popular SNK characters were gathered in a game, I really liked the fantastic feeling. If  “KOF’94” had not been successful, the KOF series would have never continued. Also, there is in “KOF ’94” the establishment of the characteristics of “characters that are unique in personalities”, “3on3 team battle” and the “System”; these things made the popularity of this series continue ever since. 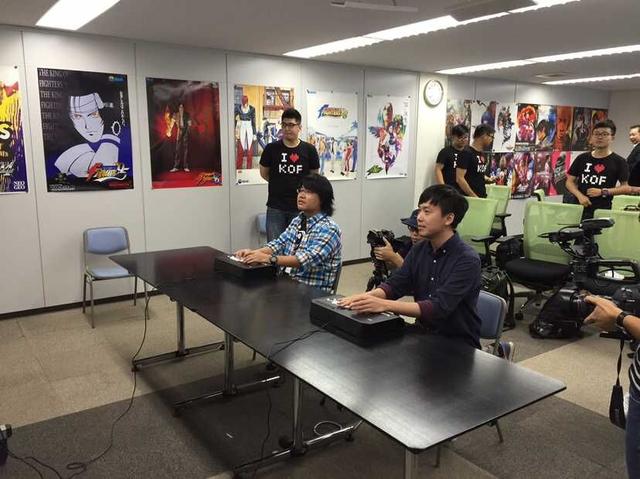 Reporter: As a smartphone game, do you think “The King of Fighters 98OL” reaches your satisfaction?
Yasuyuki Oda: Although characters all turn into cute versions, the actions, moves and other elements that could reflect a character’s personality are very well retained. In addition, the stage background, interface design, was also done in very rich detail, all of which very well recreates the atmosphere of the KOF series, from all these elements I can feel the developers’ love for KOF. For us, there are many places we can refer to, it is a good stimulus.
Reporter: What do you want to say to the Chinese players?
Yasuyuki Oda: Although I have been to China several times, every time I go, I still marvel at the popularity of The King of Fighters in China. In return for long-term support from the The King of Fighters fans, we will continue to produce better work and fulfill your expectations.

So what do you think? The addition of Oda to the team seems rather significant. Will this be more than just Maximum Impact 3? Leave a comment!

KOF in the top 3 of PSN charts!

Yesterday, guess which game shot into the top 3 of the PSN charts in Japan?

No1 was Minecraft, if you were wondering. Thx to Prof for the tip!

You don’t have to include your phone number etc, but I would like to know which country you are from.  Thanks!

We are taking submissions for the next issue which will cover GLOBAL events.

Discounts in EU and UK stores too! Use code HALLOWEEN15