Remember that game we mentioned a while ago? Well here’s the trailer, which reveals the 4 secret characters: Brazel & Catherine from XDZW and Kyo & Mai from KOF

Please don’t mention or make comparisons to that sequel

and here’s some more Kyo action, just to make sure you understand this is a scrolling beat em up, not a versus fighter.  Hmmm good thing that succubus is generic, wouldn’t want them to have more licensing issues…

Oh just randomly here’s Feishi Liuxing vs Xiaohai playing XDZW.  Remember that Beni and Terry are no longer available in this game and it remains in Beta, after a year… Nice round 2 though.  There doesn’t seem to be any further development for XDZW.

In other news, we had a particularly good session last night with the addition of Tino92, whose style has caused some complaints. Is it because of the setplay and good use of lag, with lots of OS and safe maneuvers?  Or is it just good play? Judge for yourself

Stream should be here, if available

It’s gonna get dirty real fast. Need to paint it I guess but can’t be bothered; I like the grip! pic.twitter.com/ortRIpVCTX — ON.Gunsmith Cats (@orochinagicom) September 18, 2015 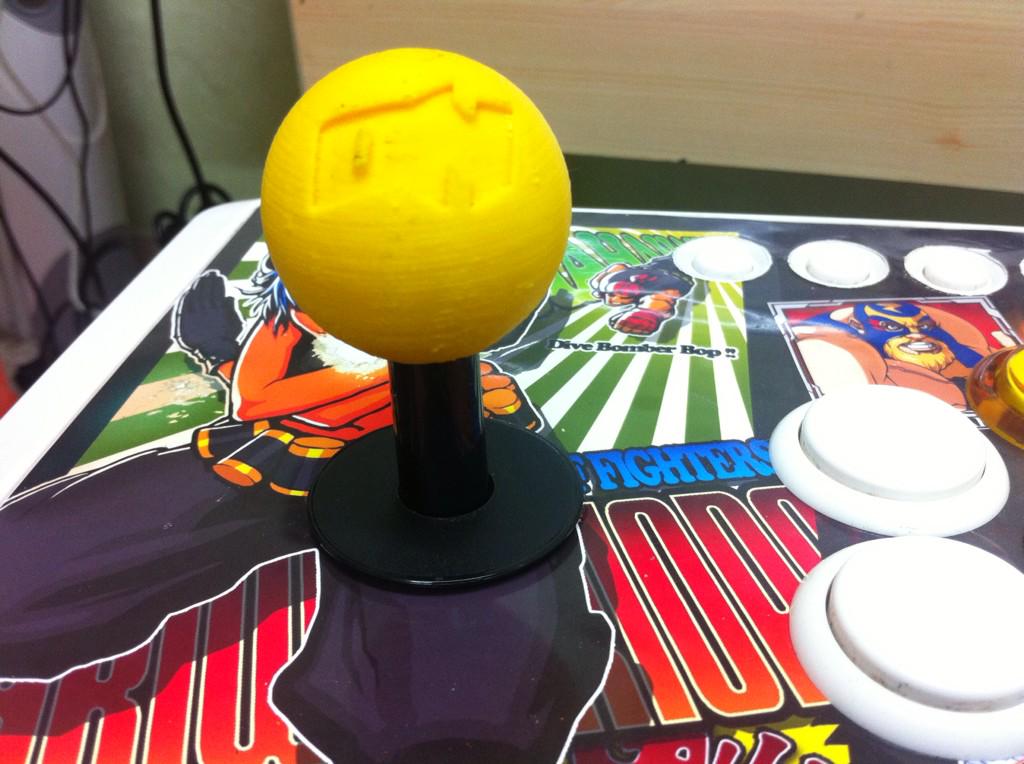 So I got myself a custom balltop, 3D printed by Anton.  It cost me €10 plus shipping (which can be another 10 euros depending where you live).

Compared to a traditional plastic balltop, the 3D printed one is lighter and so doesn’t feel as solid.  When screwed in, I could feel the screw socket turning so it’s not stuck in place.  It hasn’t moved during play, however.

As you can see, Anton can indent your ball with the design of your choice.  Some designs may feel a bit weird as your thumb presses in, and some designs could prick or hurt you, depending on the angle.  With the ON logo, I found this to be an actual advantage as my thumb would hold the ball top and not slide all over it.

Saying that, the grooves started to collect sweat and dirt rather quickly.  The 3D printer works by applying layers upon layers of plastic, and these can be seen, along with some residual leftovers, so not the nicest finish at all.  I’ve been advised to sand it, paint it, and varnish I suppose, but damn it’s time consuming enough to print out a new face for a stick.  Still, for those who want that extra touch, this will no doubt give an even classier finish.

So if you want one, grab Anton before he gets sued! ^^ You can also reach him on instagram